Interested to read this article in the Guardian’s higher education section this week, based on a report by the OECD which claims that Italian and indeed Spanish graduates are less skilled compared to other nationalities, which therefore reflects directly on the unemployment rates. The report places graduates form these Southern European countries at the bottom of a table based on a literacy test, with – you’ve guessed it – Japanese graduates at the top.

I’m not sure if this any truth in the fact that a poor performance does in fact have repercussions on unemployment – this is due to a number of other factors at least as far as Italy is concerned. The OECD conclusion is in fact largely dismissed by a leading professor at LUISS university in Rome.

Duncan McDonnell of the EUI also comments that university exams, as high school tests, are almost always oral which means they do not in fact develop their writing skills as much as they could, although they are obliged to write a lengthy dissertation at the end of their course.

Although Italian students might not learn how to write a good essay they do learn from quite an early age how to answer questions face to face with the teacher/professor, often with the rest of the class or peers as an “audience”. Surely an enormous skill in itself?

On June 8th, 2013, 34-year-old Stefano Cucca left his home in Sorso, Sardinia to bicycle around the world to promote sustainable, eco-friendly lifestyles. Thus far, Stefano has ridden 30,000 kilometers and he hasn’t left Sardinia, yet. 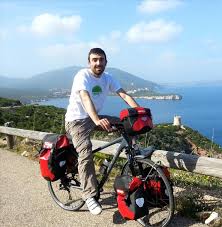 The idea for this project came to him on one of his many voyages across the globe.

Italy’s centre-left Partito Democratico are celebrating this week as they managed to win 16  out of  the 16 major mayorships at stake in ballots around the country this weekend, giving a welcome boost to Prime Minister Enrico Letta and strengthening his leadership of the government coalition with Silvio Berlusconi’s centre-right.

The biggest victory came in the capital Rome where Ignazio Marino took over the post from Gianni Alemanno gaining a massive 63.9% of votes. Further centre-left victories took place in Viterbo, Avellino, Ancona and Imperia, all previously held by the centre-right.

The northen separatist stronghold of Treviso was also toppled by a further centre-left vistory. The Lega Nord had held the mayorship for the past twenty years.  Outgoing mayor Gentilini declared it was “the end of an era”. The controversial Movimento 5 Stelle, led by Beppe Grillo, failed to make a major mark as it had done in recent national elections although gained mayorships in Pomezia near Rome and in Assemini, near the Sardinina capital of Cagliari, taking both places from the centre-left.

This year’s elections for local councils and mayors was however marked by a major drop in voters’ turnout, a sign perhaps of Italians’ increasing disillusionment and decreasing faith in the political class, at whatever level.

If Italy’s economic and political situation seemed bleak over the past few years, after last month’s elections it’s got even worse. The political deadlock situation after voters failed to elect and overall majority in Parliament has been well documented and reported, leaving Italy without a government and without a solution in sight.

Even Italy’s President Giorgio Napolitano, who has gained much respect during his seven year term in solving many sticky situations, this time fails to see clearly. “I will try to do my best, even though it’s not easy in this fog*”, said the president today.

the Italian word for fog is nebbia

Just to wish any regular or indeed any passing readers a very Merry Christmas and a Happy 2013.

Here’s the best Ital-English Christmas song ever: “Christmas with the Yours” by Elio & Le Storie Tese. The title is a direct translation of the Italian proverb “Natale con i tuoi..”, followed by “..Pasqua con chi vuoi..”, here comically rendered as something like “Easter’s what you want“. It’s a wonderful mix of Italian and English, in an entertaining attempt to render something very Italian in an American/English style, something Elio and friends are usually very good at.

So open up the panettone and spumante, enjoy the song and…AUGURI!

Most of Italy fell silent as the national football team were thrashed 4-0 by Spain in the Euro 2012 final in Kiev last night.

High hopes were pinned on the side after a convincing win against Germany in the semi-finals. Striker Mario Balotelli had finally seemed to win over the Italian public’s favour with his spectacular goals and show of strength against the German side, although his performance against Spain in the final was perhaps one of the most disappointing. He is reported to have stormed off after the final whistle before returning to collect his losers medal.

Other key players such as Andrea Pirlo and goalkeeper/captain Gigi Buffon also failed to deliver both through fatigue and pressure from the stronger Spanish side. Italy were also reduced to a 10 men team 15 minutes into the second half when substitute Thiago Motta came down with a hamstring injury.

Despite the huge disappointment for football fans and the nation as a whole, the Italian press was generally sympathetic in their treatment of players in post-match reports, grateful that the team had come so far. PM Mario Monti, who was present as official representative, said that the Italian side could come out of the tournament ‘heads high’. The squad is to be received today by President Giorgio Napolitano at the Quirinale Palace in Rome.

t used to be said of the French Education Minster that he could say what French pupils were studying at any given moment such was the uniformity of the system and the national syllabus. The same could also be said of Italy’s secondary school esame di Stato which begins nationwide this morning, with almost half a million students answering exactly the same exam questions at exactly the same time. With Italian language and literature common to all schools, the final year students – mostly 19 year olds – will be given the same essay subjects, regardless of type of school or specialist subjects.

As always there is much speculation about essay subjects which usually range from current affairs, to youth issues, to Italian literature. For the first time, exam papers will be sent to schools via the internet, rather than the in the traditional sealed envelopes delivered by carabinieri.

Exams may also be synonymous with warmer weather although never more so than this year as temperatures in most of Italy reach a record high, and forecast as reaching 39 or even 40° in some areas. With most schools not exactly renowned for air conditioning, this could make the prima prova even tougher and more gruelling for candidates.

Exams continue tomorrow with the specialist subject and the terza prova,  comprising four subjects, on Monday. The only final year students exempt from the written tests are those in areas hardest hit by the recent earthquakes – in the provinces of Modena and Ferrara where suitable facilities are lacking and fears for security persist as earth tremors continue.

There’s no peace for the people of the Emilia-Romagna region in Northern Italy. While minor tremors continue day and night in the area north of Modena, a new quake of 4.5 on the Richter scale was registered just after 6.00 am this morning just off the Adriatic coast near Ravenna.

Although the quake is recorded as happening at 26 km below the earth’s surface it was reported to have been felt on the mainland, although no major danage or injury was caused. Experts at the INGV explained that while this quake was caused by a different (and possible new) ‘fault’, it is still linked to tha activity along the northern Appenines fault, located under the plains of Ferrara, Modena and Mantua, the areas worst hit since the first major earthquake on 20th May.

As well as being a major sea port, Ravenna is also an important area for stocking and distributing methane gas. Gas platforms are also located in the Adriatic, based around the port.

The Emilia region continues to count the cost of the recent quakes, with thousands still living in tents and alternative accomodation, many small and larger businesses and industrial units still out of action, and extensive damage to the fertile countryside and livestock. The number of deaths has also risen to 25 as a 46 year old woman from Cento, near Ferrara, died yesterday after being hit by falling rubble during the last major quake on May 29th.

Many families had fled from the worst hit areas to the nearby coastal resorts along the Adriatic where there is plentiful accomodation and was considered it to be safer and healthier.

talian PM Mario Monti arrived in Ferrara last night and will be visiting the areas worst hit by the earthquake which killed seven, leaving thousands without access to their homes. Monti will visit the towns of Sant Agostino and Finale Emilia which suffered worst during the earthquake and tremors which began in the early hours of Sunday. Mr. Monti arrived straight form the Camp David summit to Ferrara, and is expected to return to Rome by tomorrow in order to declare the state of emergency for the area.

Four of the seven victims were factory workers on their night shift, at work when the worst tremor struck just after 4 a.m. on Sunday morning. The men were crushed by the relatively new buildings which collapsed during the earthquake, both in Sant Agostino and nearby Bondeno. Investigations are underway, while hundreds of companies as well as schools and public officies remain closed.

Major damage was caused to the centuries old buildings in the area, devasting the local historical heritage. Initial damage was worsened by a further quake at 3 pm, while tremors continue.

rubble in front of a collapsed historic building in Finale Emilia

Popular singer and songwriter Lucio Dalla has died in Switzerland of a heart attack. He would have been 69 years old on 4th March. Mr Dalla had just started a new tour and had also participated in the Sanremo Song Festival in February.

Born in Bologna, he was considered one of Italy’s friendlier cantautori duting the sixties and seventies, and has continued to have hit songs since. His first hit was entiled 4 Marzo 1943 the date of his birth, which also debuted at Sanremo. Although mostly recording as a solo artist, he has enjoyed numerous successful projects with other artists such as Francesco De Gregori, Gianni Morandi and Luciano Pavarotti. One of his best known songs was Caruso, dedicated to the Neapolitan tenor Enrico Caruso.

Dalla was awarded the Ordine al merito della Repubblica Italiana, the highest ranking honour of the Republic, by the Italian President in 2003.